Flock of Doves marks a massive leap in my Adobe Illustrator learning and thinking. I draw and collect shapes that inspire me. The dove is a potent Mennonite symbol that I have been exploring and playing with for years. In 2010 I designed a postcard for a local Mennonite church using the peace dove shape. To create that design, I combined hands-on collage with Photoshop skills.

Until very recently, I had little success with AI's live trace. Actually, it still doesn't work to my satisfaction, but I've created a happy (and time-consuming) compromise. I import Photoshop files into AI, lock the image and then trace the outline using the pen tool. Then I'm free to fill, scale, and repeat the traced motif to my heart's content. Now that I've figured this out, I feel like a kid in a candy store, so I'll be sharing more patterns based on this technique.

For those who celebrate Easter, Happy Good Friday and Easter to you all!
Posted by Karen Thiessen at 08:00 No comments:

Cycles I is another shadow box that I created for the Textile Museum of Canada shadow box auction. It's one of my three favourite TMC shadow boxes: Sticks & Stones and Oooo are my other two. I made it in parallel to Cycles II and both were a pleasure to make. The four squares are each 2" x 2". Two of the squares are industrial felt in which I burned marks with a soldering iron and then stitched. The pearls are from my grandma's stash, the hair is my own. The upper left square is German text collaged with birch bark and the lower right square is compost-stained fabric that I stitched and then added painted tarletan and matches.

Once most of my immediate studio deadlines are met, I'd like to return to making shadow boxed textile "environments."
Posted by Karen Thiessen at 08:00 No comments: 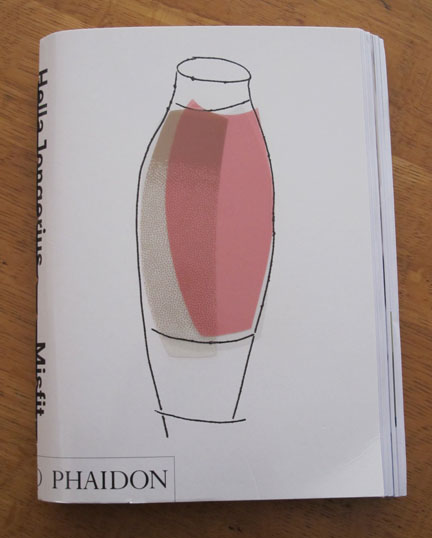 I ordered Hella Jongerius: Misfit from Amazon.ca late last summer and it arrived 8 months later. (If you go to the website, you'll notice that Amazon.ca no longer carries it, but copies are still available from Amazon.com) It was well worth the wait. Right now I'm in the midst of deadline heaven, so the work is intense. I take breaks on the sofa with this book, a quilt wrapped around me, and a mug of Japanese green tea by my side. The images and text inspire and refresh me. 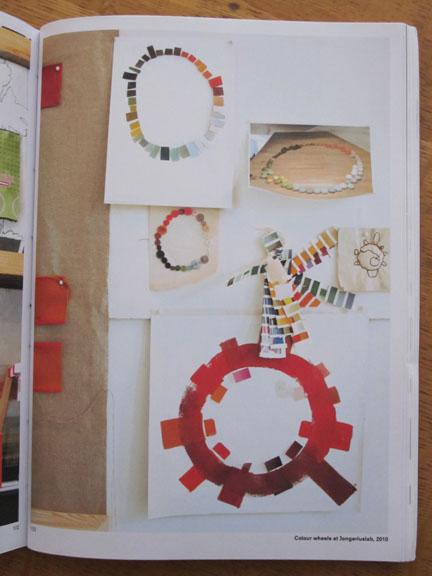 I love how Jongerius thinks. I love her experimentation, playful products, and attention to detail. 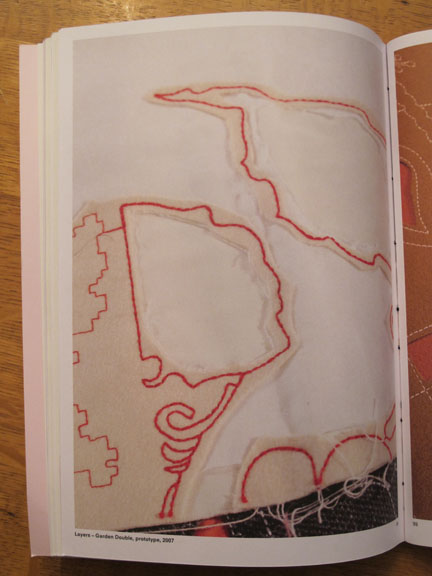 The images and essays are well done. The cover image is customizable, and the book is bound with stitching.

I've been watching Six Feet Under while stitching. Character Claire Fischer is an art student who, in one episode, was looking at art books and magazines to "break open her eye" (to expand her appreciation of various art forms and styles). Hella Jongerius: Misfit does that for me and the timing couldn't be better.
Posted by Karen Thiessen at 08:00 No comments:

Even though I'm calmly juggling five studio deadlines, a Lenten drawing practice, and a daily yoga practice, I'm still maintaining my five days a week Adobe Illustrator practice. Some days it feels a bit much, but at the end of each day a sense of accomplishment is my reward. The drawing is going surprisingly well. Few of the drawings are atrocious, and some are actually good, but not great. I'm learning to relax into the drawing process and some days I really enjoy it. Ears are surprisingly difficult to draw. For now.

Breastplate is my most successful Escheresque tesselation and it was easier to make than it looks. Okay, I'll give you a hint: tilt your head sideways and you'll see what I mean. Easy peasy.
Posted by Karen Thiessen at 08:00 No comments:

Sticks & Stones is among my top three favourite shadow boxes that I created for the Textile Museum of Canada's shadow box auction. Before I ever heard of the amazing India Flint, I was mucking around with natural dye substances. I machine stitched the base fabric quilt sandwich with free motion embroidery (I sandwiched cotton quilt batting between two layers of cotton muslin) and then I tucked the wad into some compost in a sealed container in my laundry room and then I forgot about it. Compost goes anaerobic when sealed which means that I "rediscovered" my forgotten experiment with the help of my nose. The fabric was a slimy mess when I pulled it out and it was a lot of work to wash off the particles that clung to the fabric. The whole ordeal was worthwhile once I saw (and could not smell) the end result. That green spot at the top is thanks to composted romaine lettuce. Cool, eh?
Posted by Karen Thiessen at 08:00 2 comments: 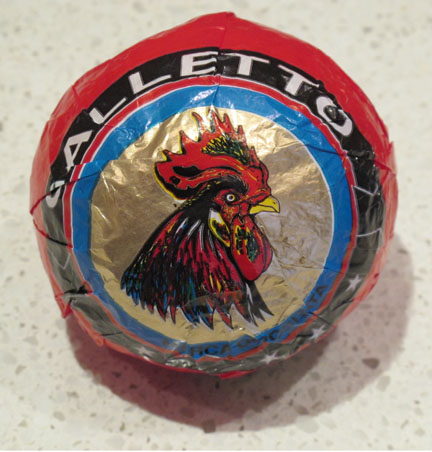 Packaging provides the best affordable art. I bought this orange for $1.30, just for the wrapper (my hubby ate the orange). Isn't it gorgeous? I also bought a package of Clipper Organic Sencha tea partially because the box is pleasing to the eye, partially because I'm down to 6 boxes (of the 40) of the discontinued Traditional Medicinals Japanese Hojicha, Kukicha, and Bancha teas that I stock-piled. Thankfully the Sencha tea is delicious and more affordable than the discontinued teas in their bland packaging. When one door slams shut, another door opens. With a surfeit of talented artists and graphic designers, there's no need for bland packaging.
Posted by Karen Thiessen at 08:00 No comments:

This is my first Escheresque tesselation pattern. It took a lot of tries (a.k.a. failures) before I could get it right, but not perfect. Now I'm eager to try other interlocking tesselations where the negative and positive spaces are the same.
Posted by Karen Thiessen at 08:00 No comments:

In 2011 I wrote a series of essays about Sandra Brownlee, her work, and how she dedicated a decade to creative growth and renewal. Brownlee stepped away from actively weaving and started creating tactile notebooks. Ten years later she returned to the loom, refreshed and inspired. Jane Hill has done a similar thing. I've known Jane for more than a dozen years and own some of her spare black-and-white pottery on which she has built her reputation. About five years ago we found ourselves taking a few Jody Joseph collage classes at the Dundas Valley School of Art. Jane has an enviable sense of design, especially in her trademark black-and-white. Jody teaches at a school in Italy, so four years ago Jane went for the first time and there began a metamorphosis. In her artist statement Jane explains "In Italy, prodded by painters around me, I began painting in oil in the landscape but was constantly drawn back to my studio, a dimly lit first floor room in an ancient stone building. There, instead of painting, I began experimenting by making 3 dimensional forms out of paper. Many of the forms reflected my love of old functional objects." In Italy, Jane discovered the work of Giorgio Morandi, an Italian painter best known for his spare still-life paintings of bottles and other vessels in a subtle colour palette.
One thing lead to another, and soon Morandi's influence and Jane's growing collection of paper vessels in her Italy studio lead her to begin painting their representations and the spaces between them on canvas. Painting the paper vessels then led Jane to create their likenesses in porcelain. It's clear that Jane's fans love her new direction because the show was awash in red dots.
The paper forms, with their raw potential, drew me in, as did the two (sold) porcelain vessels in the image above and below.


Jane's paintings are subtle. In the following images are three paintings that snuck up on me with their muted colours.

Jane's new direction is an inspiration for all artists with long careers who seek to refresh their work and dip their toes into new waters.
Pots in Place is on until March 24, 2013 at the Carnegie Gallery, Dundas, Ontario.
Posted by Karen Thiessen at 08:00 2 comments:

Email ThisBlogThis!Share to TwitterShare to FacebookShare to Pinterest
Labels: artists

Shadow Dance was the second shadow box that I created for the Textile Museum of Canada's annual shadow box auction. It incorporates fabric that I dyed, painted and hand and machine stitched. Each box is 8 inches square.
Posted by Karen Thiessen at 08:00 No comments:

Posted by Karen Thiessen at 08:00 No comments:

Kenojuak Ashevak, a Canadian Inuit artist recently died at the ripe age of 85. Berries II is inspired by one of her very early sealskin bags.
Posted by Karen Thiessen at 08:00 No comments:

The children's art community quilt is coming together. Finally, I'm in the fun part of the project, where I'm stitching the drawings. With each drawing that I stitch, so far only two of the six, I think about the child that made it and hold her in my thoughts.
This month two audiobooks are keeping me company: my first The No. 1 Ladies' Detective Agency novel, Tears of the Giraffe, by Alexander McCall Smith and another Commissario Guido Brunetti mystery by Donna Leon.
Posted by Karen Thiessen at 08:00 1 comment:

Posted by Karen Thiessen at 08:00 No comments:

Lately I've been connecting dots in the small sketchbook that I carry with me. Creating a repeat pattern of connecting dots (Molecules) in Adobe Illustrator was more difficult and time-consuming than I anticipated. I started playing with the pattern last Friday and then mulled it over all weekend before tackling it again on Monday. It took over 90 minutes to draw in AI and now I'd like to tackle it again using a different approach.
Posted by Karen Thiessen at 08:00 No comments:

Karen Thiessen
Welcome to Day In & Day Out. I'm a textile and mixed media artist and here I share my work, my process, and the work of other artists that inspire me. Thanks for visiting! You can also find me on Instagram: @dayindayoutstudio

Unless otherwise noted, I create all the content for my blog. Whether I'm making the work or photographing and writing about other artists' work, it all takes time. If you wish to pin, blog, show, or share my work, please leave a comment and always remember to credit.

Composition in White © Karen Thiessen, 2013 Now that my Unit(y) show is over, I have time to develop more  Composition pieces without...